The story of the OpenBLT bootloader

Ever had the feeling that after you tried something new, your life would never be the same? That’s how it was for me with microcontrollers and bootloaders. It all started back in 1998 when I got my hands on a Motorola HC11 based evaluation board as a college student. I figured the 2kb on-chip EEPROM was not going to cut it for serious hobby projects, so I built a 32kb RAM expansion board for it. All hand-soldered on a prototype PCB. It wasn’t pretty, but it worked. The only problem was that I had no way of downloading and running my code from the external RAM. To solve this conundrum, I had to write a bootloader for it. Little did I know that almost 20 years later, I would own and run my own business offering turn-key bootloader solutions.

After finishing my education and working in the embedded industry for a few years, my desire to work for myself became stronger with each day. In 2003 I took the plunge and gave up my job. A few months later Feaser was born. It was my dream to develop my own software product and build a business around it. Guess what software product idea came to mind? Indeed, a bootloader. It was called Loader2Go.

To fund the development of the Loader2Go bootloader, I took on embedded software projects as a freelancer. A year later, Loader2Go was running on Freescale HCS12 microcontrollers. Although the bootloader was good and several copies were sold, I realized I did not have the time nor the means to port the bootloader to other microcontroller families and compete with bigger players in the market. I decided to discontinue Loader2Go.

Several years past and Loader2Go was collecting dust. In the meantime I built up a solid client base for whom I worked on embedded software projects, but I missed the creative outlet that working on your own software product gives. Then I had an idea: To release Loader2Go as open source and, together with community contributions, grow the bootloader by supporting more microcontroller families and different communication interfaces. In 2011 the bootloader was renamed to OpenBLT (Open source BootLoader Tool) and released under the GNU GPL version 3 at SourceForge.

I was happily working on growing and improving OpenBLT in my spare time. The OpenBLT project got more popular with each year, but it did not go as anticipated. Hardly anyone from the open source community contributed. So what kept me motivated to keep working on it? Well, there was an unexpected side effect. I got more and more requests from companies to assist them with the OpenBLT bootloader integration and customization on their microcontroller system. Additionally, they requested the possibility to purchase a commercial license, which resulted in me adopting the dual licensing model. All companies were surprisingly supportive of the open source idea, and were in agreement that I could re-use non-confidential parts of their customized bootloader in the publicly available OpenBLT project.

After a 1-month trip in 2016 with motorbike and tent, adventuring through Scandinavia with final destination the North Cape in the Arctic Circle, I had time to reflect on the past and plot a path for the future. It became clear to me that the realization of my initial dream, building a business around my own software product, was still within reach and closer than it had ever been. Starting 2017 I scaled back all my non OpenBLT related freelance activities to focus full-time on the OpenBLT project.

What does this mean for the OpenBLT users? More frequent updates and patches to the bootloader and more transparency about what goes on in the background. Whatever your bootloader needs are, Feaser is here to assist and make it happen for you. Join me and see where this adventure goes next. 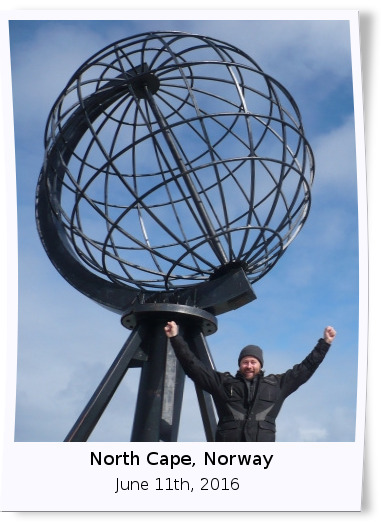 This entry was posted in OpenBLT and tagged bootloader, history, openblt. Bookmark the permalink.