All development efforts are on track for OpenBLT version 1.4.0. This version is planned to be released on the 4th of July. This article highlights the changes compared to the previous mainline release, which was version 1.3.0.

As shown in the Open Hub’s activity statistics of the OpenBLT project, I was able to dedicate more time to the OpenBLT project these last few months and it feels great! Besides the usual minor improvements and maintenance tasks, such as updating the FatFS library to stable version R0.12, the main focus has been on the side of the host tools and a bit on improving the documentation.

To my excitement, the past year has seen an increased interest from users that requested better Linux support. As a major Linux fan, I am more than willing to facilitate this. The overall OpenBLT roadmap is therefore focused on solid cross-platform support for both Windows and Linux.

Version 1.4.0 features a brand new OpenBLT host library, called LibOpenBLT. This library contains an API for communicating with the OpenBLT bootloader. This cross-platform library is programmed in C and full source code is of course available. 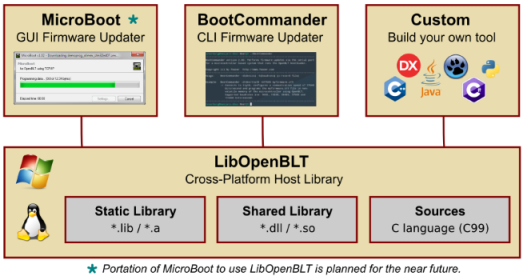 In version 1.4.0, LibOpenBLT already forms the foundation of the new BootCommander program, which replaces the currently available SerialBoot program. In the future, the MicroBoot program will be updated as well such that it has LibOpenBLT under the hood. One major benefit of LibOpenBLT is that it enables you to quickly and efficiently create your own firmware update tool, in the programming language of your liking.

LibOpenBLT currently supports communication via RS232. Other communication media such as CAN, USB and TCP/IP are planned to be added in future versions. For those interested in already taking LibOpenBLT for a spin, you can download a snapshot from the SVN trunk and documentation is on the Wiki.

Follow the OpenBLT project on Twitter to automatically be informed when the official version 1.4.0 release goes live.

This entry was posted in OpenBLT and tagged bootloader, openblt, version 1.4.0. Bookmark the permalink.