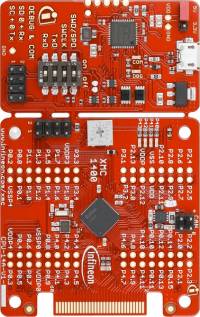 This demo is targeted towards the Infineon XMC1400 Boot Kit board, with 200 kB internal Flash EEPROM and 16 kB internal RAM.

To program the bootloader into the internal flash on the XMC1400 microcontroller, the on-board Segger J-Link JTAG interface was used. However, this is not required if you have another means of programming the internal flash.

To compile the demo programs you can use the Dave (version 4) development environment for XMC microcontrollers.

The first step in getting the the bootloader up-and-running, is the creation of the Eclipse workspace in Dave. After starting Dave, you are prompted to open a workspace. It is easiest to create a new one in the following directory: .\Target\Demo\ARMCM0_XMC1_XMC1400_Boot_Kit_GCC\

To import the demo programs into the workspace, select File → Import from the program menu. Then select Infineon → DAVE Project. On the next screen you select the following directory as the root directory: .\Target\Demo\ARMCM0_XMC1_XMC1400_Boot_Kit_GCC\. Eclipse will automatically find the Boot and Prog projects and select them: 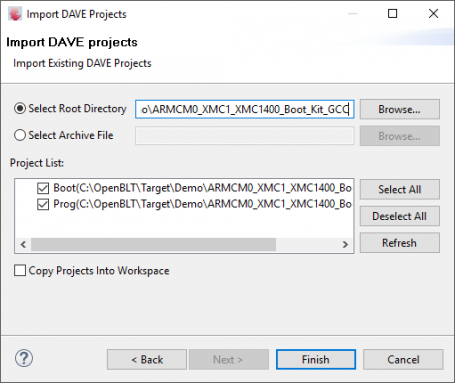 Before the bootloader can be used, it needs to be built and programmed into the XMC1400's internal flash memory. The steps in this section only need to be done once.

When using IAR EWARM, simply open the workspace from within the Embedded Workbench. The workspace file (xmc1400.eww) is located at: \Target\Demo\ARMCM0_XMC1_XMC1400_Boot_Kit_IAR\Boot\ide\. Once opened, select Project→Rebuild All from the menu to compile all the bootloader sources and link them together into the final executable.

When using IAR EWARM, simply open the workspace from within the Embedded Workbench. The workspace file (xmc1400.eww) is located at: \Target\Demo\ARMCM0_XMC1_XMC1400_Boot_Kit_IAR\Prog\ide\. Once opened, select Project→Rebuild All from the menu to compile all the demo program sources and link the together into the final executable.

To download the demo program \Target\Demo\ARMCM0_XMC1_XMC1400_Boot_Kit_IAR\Prog\bin\demoprog_xmc1400.srec using the bootloader, follow the instructions in the following links, depending on the communication interface you intend to use: