Firmware debugging in combination with OpenBLT

If your embedded system makes use of the OpenBLT bootloader, then essentially you have two software programs present in flash memory: your own firmware and the OpenBLT bootloader. This added complexity can cause a problem when trying to debug your firmware. This article describes the cause of this problem and explains how it is side-stepped, giving you full firmware debug functionality.

Next, include header file string.h to make sure the compiler knows the function prototype of memcpy():

If you chose the IAR Embedded Workbench as your development tool, then you are in luck. IAR’s C-SPY debugger automatically sets the program counter to the reset handler address of the loaded firmware, so no further steps are needed. If you use a GDB based debugger, such as the one included with Atollic’s TrueStudio, you can add a command to the debugger’s startup script to change the program counter register: set $pc = <address>.

Here follows the example for the Nucleo-F091RM demo user program. This demo firmware is linked to start at memory address 0x08002000 in flash. This is where the demo firmware’s pseudo vector table is present. The 2nd entry (at offset 0x0004) into this vector table, holds the address of the reset handler function: 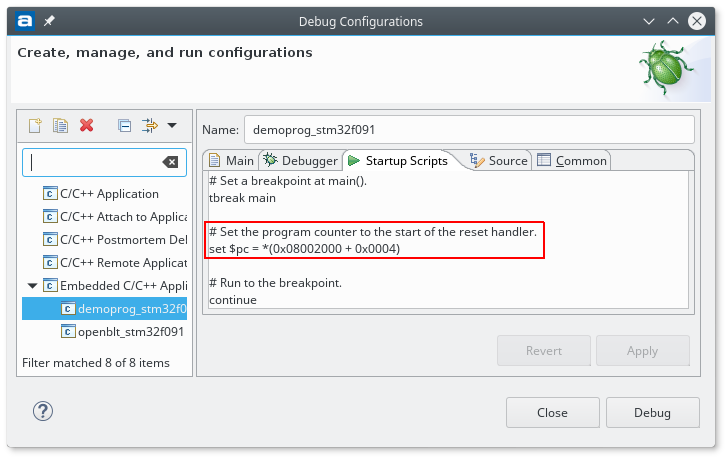 The method presented in this article should work for all microcontroller supported by the OpenBLT bootloader. If you are struggling with getting it to work, feel free to contact us for hints and tips. Did you figure out an even better method? Feel free to share it with us in the comment section.

This entry was posted in OpenBLT and tagged bootloader, debugging, openblt. Bookmark the permalink.