BootCommander was written in the C programming language (C99) and developed with cross-platform support in mind. It has been successfully tested on a Windows PC, Linux PC and even on embedded Linux systems such as a Raspberry Pi and a Beagle Board. 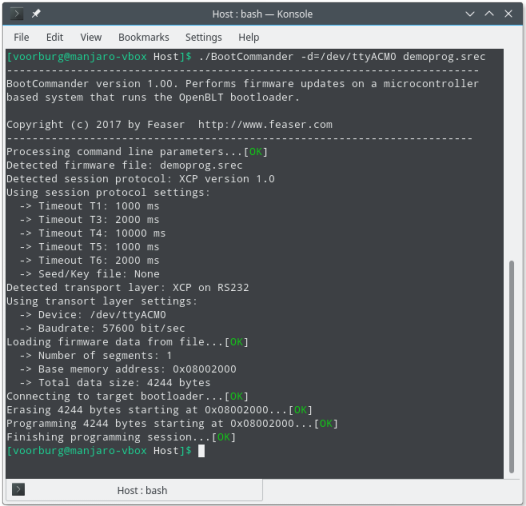 Under the hood, BootCommander relies on the OpenBLT host library (LibOpenBLT) for handling the actual communication with the bootloader.

Thanks to the open source nature of the OpenBLT project, full source code is available for the BootCommander program. This makes it a great reference and starting point for those that would like to develop their own firmware update tool. For details on its implementation, refer to the reference manual that is located at: .\Doc\RM_BootCommander.pdf.

The currently supported firmware file format is S-records and the location of the firmware file can be specified as either an absolute or relative path. The options the make it possible to select and configure the communication protocol and transport layer to use:

Additional XCP on CAN settings (xcp_can):

Note that is it not necessary to specify an option if its default value is already the desired value. This means that the following two examples behave exactly the same:

BootCommander relies on CMake to automatically detect the build tools on your system and to generate the build environment for it. The following instructions assume that CMake is installed on your system and is available on the path. Windows users can download the installer from http://www.cmake.org/. Mainstream Linux distributions have CMake in their software repository and it can be installed from there. Example for Ubuntu based distributions:

Note that BootCommander relies on the OpenBLT Host Library (LibOpenBLT) and some of the files that were generated when building LibOpenBLT. Therefore, make sure you already built LibOpenBLT, before you attempt to build BootCommander.

This method assumes that the basic tools needed for building software are installed. At least the GCC compiler and Make are needed. On Ubuntu based distributions, these tools can be installed via command:

Using the terminal, set the working directory to ./Host/Source/BootCommander/build. Next, type the following two commands to detect and generate the Unix Makefiles based build environment and then build the BootCommander executable:

After a successful build, the BootCommander executable is located in the ./Host directory.

Using the Command Prompt in Windows, set the working directory to .\Host\Source\BootCommander\build and type the command:

After a successful build, the BootCommander.exe executable is located in the ./Host directory.

If you use the 32-bit LibOpenBLT shared library from before OpenBLT version 1.14, or if you rebuilt it yourself as 32-bit, then you should build BootCommander as 32-bit as well. To build a 32-bit version of BootCommander, generate the build environment with command “cmake -A Win32..”.

This method assumes that the MinGW compiler toolchain is installed on your PC. A convenient way to install it, is by downloading the installer that bundles the Code::Blocks IDE together with MinGW. When using OpenBLT version 1.14 or newer, it is recommended to download the 64-bit installer version, because the included libopenblt.dll file is 64-bit as well. Otherwise you can download the 32-bit installer version.

Using the Command Prompt in Windows, set the working directory to .\Host\Source\BootCommander\build. Next, type the following two commands to detect and generate the MinGW Makefiles based build environment and then build the BootCommander executable:

After a successful build, the BootCommander.exe executable is located in the .\Host directory.