For this reason the bootloader contains a seed/key security module. If this security module is enabled in the bootloader's configuration, updates can only be made by users that have the seed/key shared library (*.dll, *.so) with the correct security algorithm on their PC. If not, then firmware updates are not allowed and the bootloader will simply not allow a connection to be established, regardless of how many times the microcontroller is reset:

The demo bootloader programs are prepared to use the seed/key security module. All that has to be done to enable it, is to set the configuration macro BOOT_XCP_SEED_KEY_ENABLE to a value of 1 in “blt_conf.h”. Once changed the bootloader should be rebuild an programmed into the flash memory of your microcontroller.

The next step is to configure the location of the seed/key shared library in Microboot. The demo programs are preconfigured to work with the one called “libseednkey.dll”. This file is located in the same directory as Microboot. Follow these steps: 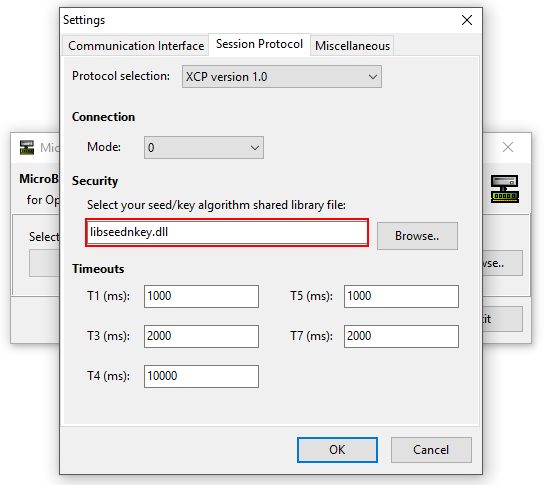 If you now perform a firmware update, everything will work as usual. The moment you remove the “libseednkey.dll”-file or if it contains an invalid security unlock algorithm, firmware updates will be rejected by the bootloader.

The bootloader calls two hook-functions during the security unlock procedure: one for obtaining the seed (XcpGetSeedHook()) and one for verifying the key (XcpVerifyKeyHook()). The default example implementation in the demo programs is very simply. The seed is always just one byte with the hexadecimal value of 55h. The security algorithm is such that the value of the key is the value of the seed, minus 1:

To customize, change the code in these two functions and use your creativity to change the seed generation and the key verification algorithm. One good approach is to use a seed that changes, ideally using a random number generator peripheral, if your microcontroller offers one. Otherwise, you can use a software solution such as the on available in MicroTBX. Don't forget to rebuild the bootloader and program it into the flash memory of your microcontroller after making changes.

Customize the key generation algorithm to match the one you implemented in XcpVerifyKeyHook(). Once done, rebuild the XCP Seed and Key shared library. Instructions for building the shared library are located towards the bottom of this page. Under Windows the output is “libseednkey.dll”, and under Linux it is “libseednkey.so”.

Building the XCP Seed and Key shared library from sources

SeedNKey relies on CMake to automatically detect the build tools on your system and to generate the build environment for it. The following instructions assume that CMake is installed on your system and is available on the path. Windows users can download the installer from http://www.cmake.org/. Mainstream Linux distributions have CMake in their software repository and it can be installed from there. Example for Ubuntu based distributions:

This method assumes that the basic tools needed for building software are installed. At least the GCC compiler and Make are needed. On Ubuntu based distributions, the tools can be installed via command:

Using the terminal, set the working directory to ./Host/Source/SeedNKey/build. Next, type the following two commands to detect and generate the Unix Makefiles based build environment and then build the shared SeedNKey library:

After a successful build, the shared library libseednkey.so is located in the ./Host directory.

Using the Command Prompt in Windows, set the working directory to .\Host\Source\SeedNKey\build and type the command:

After a successful build, the shared library libseednkey.dll is located in the ./Host directory.

Note that this builds a 64-bit version of libseednkey.dll, which only works together with 64-bit versions of the PC binaries (MicroBoot, BootCommander and LibOpenBLT). This is the default starting with OpenBLT version 1.14.

When using the PC binaries from before OpenBLT version 1.14, or if you rebuilt them yourself as 32-bit, then you should build libseednkey.dll as 32-bit as well. To build a 32-bit version of libseednkey.dll, generate the build environment with command “cmake -A Win32..”.

This method assumes that the MinGW compiler toolchain is installed on your PC. A convenient way to install it, is by downloading the installer that bundles the Code::Blocks IDE together with MinGW. When using OpenBLT version 1.14 or newer, it is recommended to download the 64-bit installer version, because the included PC binaries (MicroBoot, BootCommander and LibOpenBLT) are 64-bit as well. Otherwise you can download the 32-bit installer version.

Using the Command Prompt in Windows, set the working directory to .\Host\Source\SeedNKey\build. Next, type the following two commands to detect and generate the MinGW Makefiles based build environment and then build shared SeedNKey library:

After a successful build, the shared library libseednkey.dll is located in the .\Host directory.