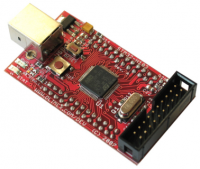 This demo is targeted towards the Olimex STM32H103 board, with 128 kB internal Flash EEPROM and 20 kB internal RAM.

This header board is a small version of the Olimex STM32P103, however it does not have a UART or CAN connector, but a USB connector. Therefore, the OpenBLT demo for this board features bootloading over USB. Note that this demo is compatible with the STM32P103 board as well.

To program the bootloader into the internal flash on the STM32F103 microcontroller, the Olimex ARM-USB-TINY-H JTAG interface was used in combination with OpenOCD 0.4.0. However, this is not required if you have another means of programming the internal flash. To build the demo programs you can use the GNU ARM Embedded toolchain.

Before the bootloader can be used, it needs to be built and programmed into the STM32F103's internal flash memory. The steps in this section only need to be done once.

To build the bootloader, open a command prompt in directory \Target\Demo\ARMCM3_STM32F1_Olimex_STM32H103_GCC\Boot\ and run the command:

The bootloader program is now ready to be programmed into the internal flash memory of the STM32F103. Using your favorite programmer, flash the bootloader using one of the following files, depending on what file type your programmer supports:

To build the user program, open a command prompt in directory \Target\Demo\ARMCM3_STM32F1_Olimex_STM32H103_GCC\Prog\ and run the command:

To download the demo program \Target\Demo\ARMCM3_STM32F1_Olimex_STM32H103_GCC\Prog\bin\demoprog_olimex_stm32h103.srec using the bootloader, follow the instructions in the following links, depending on the communication interface you intend to use: