To reserve flash memory for the bootloader and protect it from being erased and/or reprogrammed during firmware updates, comment out lines in table flashLayout[] in source-file flash.c. Refer to the demo bootloader program for an example.

Adjusting the start address of the user program in flash to make sure it doesn't overlap with the bootloader, is achieved by changing the program's ROM start address in the linker descriptor file. Set it to the start address as present in the first line in table flashLayout[] that is not commented out. In the previous example, this is 0x08002000:

This procedure is automatically performed by the bootloader, right before it starts the user program. The only requirement for the user program is that it does not use the first 192 bytes of RAM. This can be achieved by editing the linker descriptor file and changing the RAM start address from 0x20000000 to 0x200000C0. Refer to the demo user program for an example.

A 32-bit checksum value is programmed by the bootloader at the end of a programming session. Upon startup, the bootloader verifies the correctness of this checksum to determine if a valid user program is present and can be started.

The bootloader programs this value at the end of the user program's vector table. Its exact location is configured by macro FLASH_VECTOR_TABLE_CS_OFFSET in flash.c. The vector table size can vary based on the microcontroller derivative you are using. Please verify that the default value of FLASH_VECTOR_TABLE_CS_OFFSET is correct. If not, you can simply override the value by adding the macro with the correct value to the blt_conf.h configuration header file.

The user program must reserve space for this 32-bit checksum value. To reserve this space, simply enter one extra dummy entry into the interrupt vector table. This reserves space for the checksum at memory address: flash base address + flash reserved for bootloader + FLASH_VECTOR_TABLE_CS_OFFSET. Refer to the demo program for an example.

On the ARM Cortex-M0 the first entry into the vector table holds the initialization value for the stackpointer, which is automatically loaded into the CPU's stackpointer register upon reset. 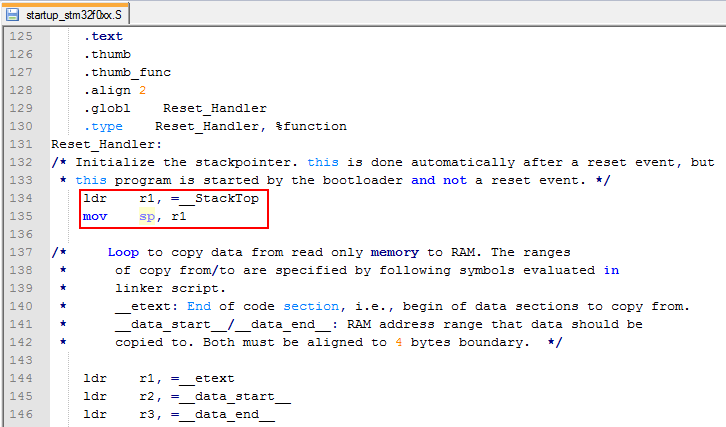